Free delivery on orders over $100

An inspired hybrid, marrying mid-length ease and flow with the nimble rail-to-rail fluidity of a shortboard.

The secret to its success – the Flying Frog is consistently Maluku’s best-selling model – begins with that outline. It’s effectively a board of two halves. In the nose it’s round, wide, voluminous, and flat, which means it’s stable, easy to paddle and catch waves on, and negotiates slow or mushy sections with ease. In the tail it’s narrow, refined, and benefits from a hint more rocker, all of which will help initiate turns and access steeper, more critical parts of the wave.

In a sense the board was conceived in rebuttal to the super-wide grovel-style shortboards that have become increasingly popular over recent years, but whose fat tails can be very stubborn and hard for the average surfer to control. Thanks to the nip-and-tuck through the tail, that’s certainly not the case with the Flying Frog.

The bottom shape has been carefully adjusted to complement the other design elements. Single concave through the front half of the board will add lift, counteracting the flat entry rocker, while the subtle vee through the aft section will encourage the board to roll or “tip” over from rail to rail more easily – crucial in a board this wide.

So, paddle in early and easy on that reassuring front-end foam, lock into trim or pump down the line with your front foot on the giant sweet spot, then load up the back foot and unleash as though you were surfing a normal shortboard. The pulled-in tail is designed to be sensitive and responsive, but it has the added benefit of providing hold when the swell picks up. Prepare to be amped in all conditions!

One other great thing about the Flying Frog is that it works at 6’0” as well as it does at 8’0”. Size according to ability and preference. Above 7ft in length it lends itself perfectly to the surfer starting out and looking for an frictionless route to a decent shortboard surfing style, perhaps before stepping down to a proper shortboard. Under 7ft it will suit the more advanced surfer looking to keep their rail work tight on days without enough grunt for their standard stick.

Bonus style points are on offer via the single-fin option, while the quad set-up brings small-wave performance chops to the table. The prospect of a cheeky 2+1 widow-maker (single with side bites) also entices. Also available (elsewhere on the site) in Level One ECOBOARD epoxy construction. 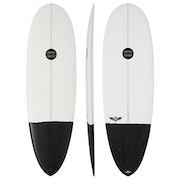